The regulations discussed here are based on rules set by the Professional Disc Golf Association (PDGA) that went into effect on January 1, 2022.

Most rules discussed here relate to the regulations under 804.01 in the Official Rules of Disc Golf, which you can find a fully searchable version of in the More tab of the UDisc app.

We want to extend a huge "Thank You" to Todd Lion, the PDGA's Event Support and Training Manager, for reviewing this post prior to publication. Lion helped create the most recent version of the Official Rules of Disc Golf.

This is just one post in our series seeking to help players better understand disc golf rules. If you're interested, check out others on out of bounds, foot faults/legal stances, relief, and the two-meter rule once you've mastered everything below.

What Is a Mandatory (Mando) in Disc Golf?

A mandatory (or, commonly, "mando") is when a course designer or tournament director (TD) mandates how disc golfers' discs can legally pass an obstacle (e.g., a tree or a pole) as they make their way to the basket or other target.

A player who does not pass an object correctly – called "missing a mando" – adds one penalty throw to their score for a hole. If a player misses a mando multiple times or misses multiple mandos on the same hole, each and every miss incurs an additional one-throw penalty.

The mandos disc golfers encounter most often make them go to the left or right of an obstacle.

See an example of a basic disc golf mando below:

However, there are occasionally two mandos that work together to force players to go between them. These are typically called double mandos. See below: 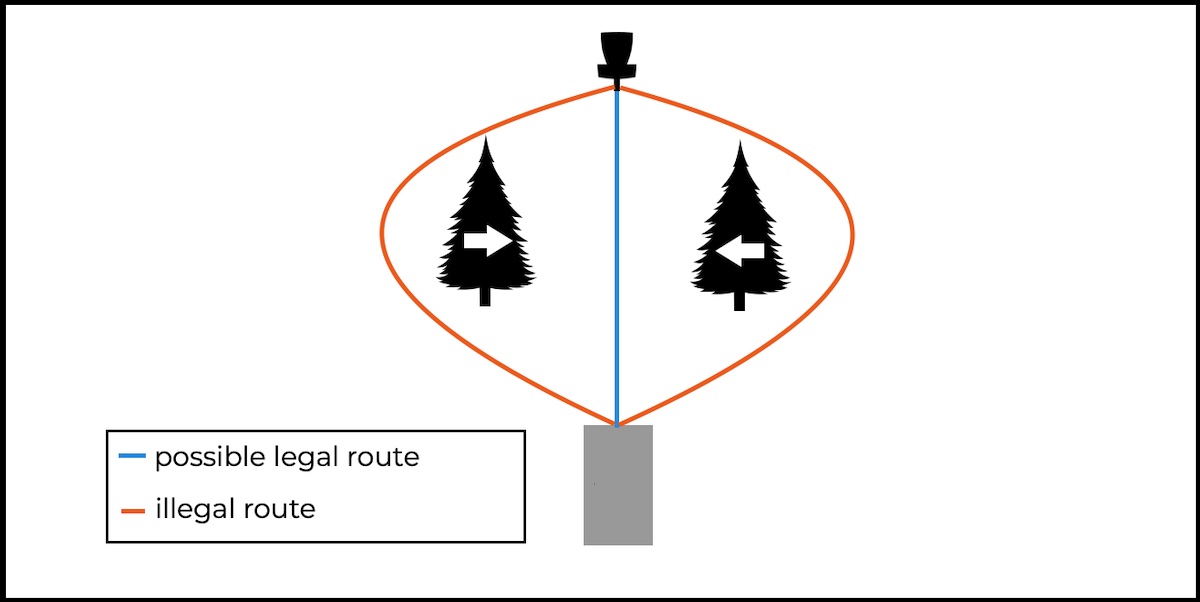 And, yes, triple mandos (and above) exist, too:

Why Do Mandos Exist in Disc Golf?

Mandos are typically used for at least one of three reasons:

With that said, though mandos are a common part of disc golf, they're also highly contentious.

Some people are philosophically opposed to mandos and believe designers and TDs should create holes that more naturally cause players to throw a variety of shot shapes and avoid endangering others or property. On the opposite side of that argument are those who see mandos as a tool to create more interesting, safer courses when given limited space or obstacles to work with.

On the more technical side, mandos are often the stuff of rule-makers' nightmares and frequently lead to confusion and misinterpretation of the correct way to play a hole among players (you'll see examples of why later on). Additionally, the PDGA's course design guidelines strongly discourage incorporating mandos.

When Have You Missed a Mando in Disc Golf?

Mandos create what the PDGA's Official Rules of Disc Golf call "restricted space" (804.01), which is an imaginary plane that will usually extend in the direction opposite of where a mando forces you to throw. The rules specifically say the plane is "vertical," so it will typically extend infinitely upward, too. When your disc fully passes through restricted space, you have missed the mando.

It does not matter if the throw is your first, second, third, etc. on a hole. If you cross the restricted space, you’ve missed a mando and receive a penalty.

It does not matter where the disc comes to rest. If you cross the restricted space but then kick back out of it, you’ve still missed the mando.

This can all be summed up in a simple statement: If your disc ever crosses the restricted space at any time, you’ve missed the mando.

Fortunately, seeing the rule is a lot easier than reading about it. So we created a few visualizations of restricted space to help you better understand how it works.

This one emphasizes how entering restricted space from any direction results in a missed mando penalty:

The next image drives home how you've missed a mando as soon as your disc fully crosses restricted space no matter where your disc comes to rest. It also offers a different type of visual if the last one didn't click:

As you can tell from that example, TDs have to be extremely detailed in their rule descriptions and course setups when they include mandos. If you have questions about a mando before playing a tournament and can't find the resources to answer them, you should contact the TD or ask your questions in the players' meeting before the round begins.

If you're playing a casual round and a course has a mando that isn't well-defined, just use your best judgement to decide what direction and thickness of the restricted space makes the most sense.

How Do You Keep Playing After Missing a Mando?

If you miss a disc golf mando, you receive one penalty throw. There are three possible ways you can continue playing a hole after missing a mando:

How Do Mandos Affect the Line of Play in Disc Golf?

As of the January 2022 rules update, mandos have absolutely no effect on the line of play in disc golf. The line of play is always a direct line between a player's lie and the basket.

Those who don't know what "line of play" means can find a detailed description in our post on relief in disc golf. In essence, it's the direction a player has to orient their body toward as they throw. Before the January 2022 rule updates, mandos could affect the line of play. As we said above, that's no longer the case.

We've been overwhelmed by the positive response to this series and are excited to continue adding to it. If you have rules you'd like us to cover, let us know in a comment on social media or send a quick e-mail to us at releasepoint@udisc.com.