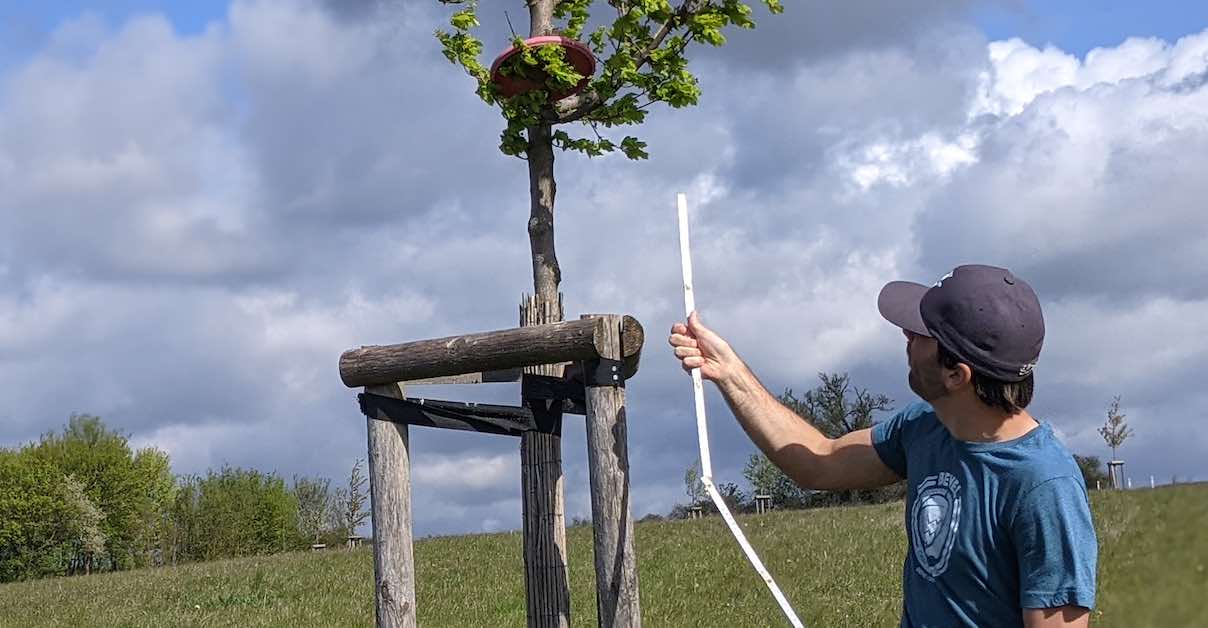 Our sincerest thanks go to Professional Disc Golf Association (PDGA) Rules Committee chairperson Mike Krupicka for reviewing this article prior to publication and disc golf legend and seminal figure Dan "Stork" Roddick for telling us the story of how the two-meter rule was created and his views on its fairness.

Most rules discussed here relate to 805.02 in the PDGA's official rule book, which you can find a fully searchable version of in the More tab of the UDisc app.

This is just one in our series of articles seeking to help players better understand disc golf rules. If you're interested, check out others on out of bounds (OB), mandatories (mandos), and foot faults/legal stances once you've mastered everything below.

What Is the Two-Meter Rule in Disc Golf?

Disc golf's two-meter rule is an optional regulation that makes it so a player whose disc comes to rest two meters (about 6 feet 7 inches) or more above the playing surface is penalized one stroke. The player can continue play from directly underneath their disc on the playing surface.

Notably, the part of the disc closest to the playing surface is used to determine whether it is two meters or more up.

Take a look at an example two-meter situation in the image below:

A tournament director could decide to have the two-meter rule in effect on every hole throughout an entire tournament or designate that it be used only on particular holes. They could even say that it only applies to one or more specific obstacles on a course and nowhere else.

Importantly, a player taking a two-meter penalty can opt to back up anywhere along the line of play to take their next shot with no additional penalty (rule 803.02 E). The line of play is a line extending from the target to the place on the playing surface directly below the disc and beyond. If you're having a hard time visualizing that, this could help: 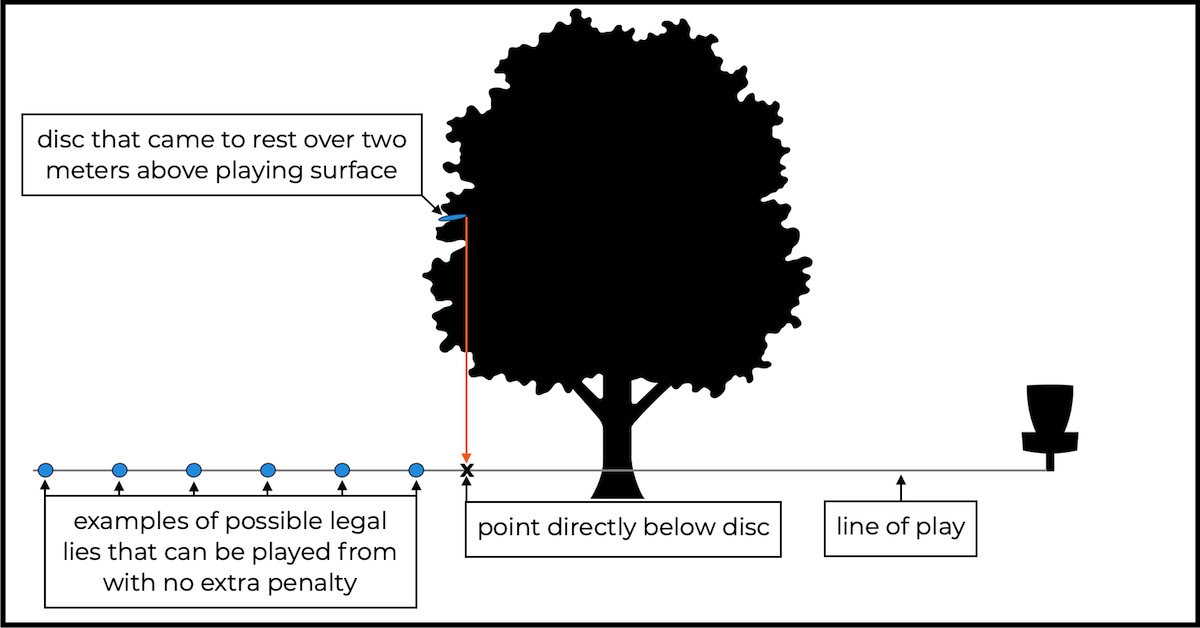 The rule allowing players to move backward along the line of play also applies when a player goes OB, and you can find more about it and the line of play in our article explaining OB rules.

It's likely that you have more questions about the two-meter rule in practice. We hope you'll find your answers here:

The Invention of the Two-Meter Rule

The two-meter rule predates the PDGA and even the disc golf basket. The rule was created for the Octad disc sports competition in 1974, which was run by Dan "Stork" Roddick, "Flash" Kingsley, and Gary Seubert at Rutgers University in New Brunswick, New Jersey. The Octad, as its name suggests, featured eight disc sport events, and disc golf was one of them.

Before moving on, it's worth knowing that Stork (who asked to be referred to by his nickname in this piece) has had a huge impact on disc sports generally. He is PDGA #3, a hall of famer in multiple disc sports (including disc golf), and an author of several books on disc sports. He also headed disc manufacturer Wham-O's sports marketing department from 1975-1992, served as President and secretary of the World Flying Disc Federation, and much more.

With all that in mind, let's get back to the two-meter story.

In 1974, there were no standard rules for disc golf. Small groups of people across the U.S. were playing it using whatever restrictions they felt were fair. But the Octad was a formal competition where a winner would be declared, and Stork, Kingsley, and Seubert knew it would be important for everyone to agree on what was and wasn't allowed before play began.

"We were going to have to make a decision about how to play the sport," Stork said. "I couldn't just send people out and say, 'Play whatever you imagine golf to be.'"

So, before the disc golf portion of the competition began, Stork went out with the competitors to walk the course and come to mutual understandings about the rules. The course had numerous trees and bushes on it that could catch discs, and Stork wanted to regulate how to continue play if that happened.

Though the idea has since become controversial, Stork said there was wide agreement that players whose discs came to rest in a bush or tree where they couldn't establish a stance should be penalized. The only point of contention was how high up a disc had to be before it merited a penalty. Stork's first suggestion was that if a player could get a foot to reach where the disc was at rest, there would be no penalty.

But that didn't sit well with everyone. Stork recalled in particular that Jim Palmeri spoke against the idea. Palmeri was the head of the Rochester Frisbee Club from Rochester, New York, and would go on to be a seminal figure in disc golf competition history, including running a disc golf tournament where Roddick would win a car later in 1974.

Palmeri, whom Stork called "a relatively short guy," pointed out that Stork, who's 6 feet 6 inches/1 meter 98 centimeters tall, would have an advantage if the rule was based entirely on a player's ability to reach a spot.

"I said, 'Okay, I hear you from way down there; we'll make it standard,'" Stork said, making a jibe about Palmeri's height.

Stork needed to choose something that was easy to measure, so he suggested two meters, which was almost exactly his own height. Everyone agreed that height seemed fair, and the rule was set.

Players from various clubs took the rule back to their own regions after the 1974 Octad, and it became standard at the growing number of disc golf events popping up during the era, including Palmeri's own tournament later in 1974. The two-meter rule's use at those competitions earned it a place in the slowly-forming canon of generally accepted disc golf rules. It even appeared on a rules sheet from the late '70s under the name "unplayable lie" that "Father of Disc Golf" Ed Headrick posted at courses his company DGA built.

Despite apparently smooth sailing for the two-meter rule when it was invented and the years immediately thereafter, it soon began to encounter turbulent waters. More and more players began speaking out about the rule and calling for it to go.

Why? We cover that in the next section.

Why Is the Two-Meter Rule Controversial?

There are two major arguments those who are against the two-meter rule make: 1) It's difficult to enforce and 2) it's too random.

On the enforcement side, the main issue, detractors say, is that disc golf is a sport refereed by the players themselves. Since most players don't carry measuring devices with them, they would often have to make close calls subjectively. This could set groups up for drawn-out arguments that create unpleasant tensions and make other players wait while a group debates the right call.

As for randomness, some believe that whether a disc gets caught in a tree (or other obstacle) or doesn't is too much a matter of luck. Different players could hit very similar spots on a tree, and some discs would come down and some wouldn't. Those against the two-meter rule would say those results have too little to do with players' skills for there to be a rule penalizing those who stay up.

Another aspect of the random penalization argument is that it can lead to double punishment for a single throw. Most well-thrown discs are over two meters for the majority of their flights, and if a player hits a tree when intending to follow a fairway, they're likely already punished with loss of distance. Doubly punishing those who are unlucky enough to also get caught up over two meters when they attempt to take a normal line to a hole doesn't sit well with many players.

Plenty of other disc golfers like the two-meter rule, however, and its inventor is among them. Stork laid out the reasons he thinks the rule is useful during our conversation.

For one, he believes it can be used effectively by course designers just like OB and mandatories. It amplifies risk/reward, making players calculate whether taking a high route on a hole is worth the risk of the possible two-meter penalty. Additionally, he doesn't see the logic in how a player whose disc is in an unreachable position far above the playing surface should be able to take a huge amount of relief with no penalty.

"You're 40 meters up in a tree? Go play it as it lies, friend," Stork said to a theoretical player during our talk. "You can't? Okay. There should be some cost for that."

As for complaints about randomness, Stork was unsympathetic.

"Welcome to the game and life!" he said.

In that same part of our conversation, Stork related how he recently saw a pro at a big tournament go into a basket at an excellent angle only to have his disc cut through, catch edge, and roll into OB water. He used the story to refute that the two-meter rule was any more arbitrary than such relatively uncontroversial results.

"I think it's less of a crazy penalty than many of the things we live with in the game," Stork said.

Interestingly, despite his own preference to play with the rule, Stork believes that its current status as an optional rule is a fair compromise given the debates surrounding it.

Legacy of the Two-Meter Rule

The two-meter rule was enforced at all PDGA-sanctioned disc golf events until the 2006 rules update. Prior to that update, Stork recalled, the PDGA had conducted polls of PDGA members about the two-meter rule and found the membership was roughly evenly split on the issue. Given those results and bowing to constant debate about the rule (and surely not immune to it internally), the PDGA Rules Committee decided to make the rule optional for tournament directors to put into effect. It's stayed that way ever since.

The two-meter rule's status as an optional rule is somewhat controversial itself, with some believing it should either always be in effect or go away entirely. But that, like the debate about the rule's fairness, is not one that will ever be concluded to everyone's satisfaction.

Since the 2006 rule change, the two-meter rule has become mostly connected with California and the west coast. As far as our research could uncover, there doesn't seem to be a concrete narrative as to why. Some theorize it's because there are fewer trees there than on densely wooded east coast courses and the two meter rule helps course designers utilize them to their fullest, but that's just speculation. It could have as much to do with the preferences of influential tournament directors or the rule being connected to cultural identity.

No matter what you're opinion is on the two-meter rule, we hope you learned something about it from this piece and feel ready to play by the rule should it ever pop up at a tournament you enter. If you enjoyed what you read and don't want to miss out when we release new pieces like it, consider subscribing to our Release Point newsletter that keeps you up-to-date with this blog and what's happening at UDisc.